Are we increasingly trapped in “filter bubbles” restraining our knowledge horizon by hiding potentially unusual or even unsettling information? Can algorithms be “neutral” ? What could be the intentions of those who might technically “bias” them ? Which consequences does algorithmic recommendation bear on the autonomy and free choice of Internet users ? Which informational landscapes and, more broadly, digital public spaces does the combination of human behavior and platform algorithms contribute to create ?

Algodiv is an interdisciplinary project gathering sociologists and computer scientists around the issue of informational diversity in online public spaces, with an additional focus on the effect of algorithms. It aims at addressing this political, cultural and economic challenge by first clarifying the different acceptations of the notion of informational diversity and proposing adequate metrics, then by empirically and experimentally exploring the joint effect of algorithmic recommendation and Internet user actions.

The project examines informational diversity and authority in three distinct contexts of use of algorithms: first, with respect to the global hypertext structure of the web; second, by focusing on local interactional circles, including affinity networks found on various social media platforms; third, by looking at browsing traces left by users thanks to exclusive partnerships with online news portals such as Groupe Le Monde or melty.

These three types of fields will be studied through quantitative and qualitative approaches in order to confront algorithmic rankings and digital practices. In some cases, experimental settings will be developed to measure more directly the link between proposed diversity and consumed diversity. 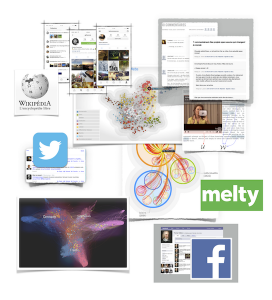 Algodiv focuses on a variety of web environments, from blog and micro-blog ecosystems to social media platforms, through wikis and image- and article-sharing websites